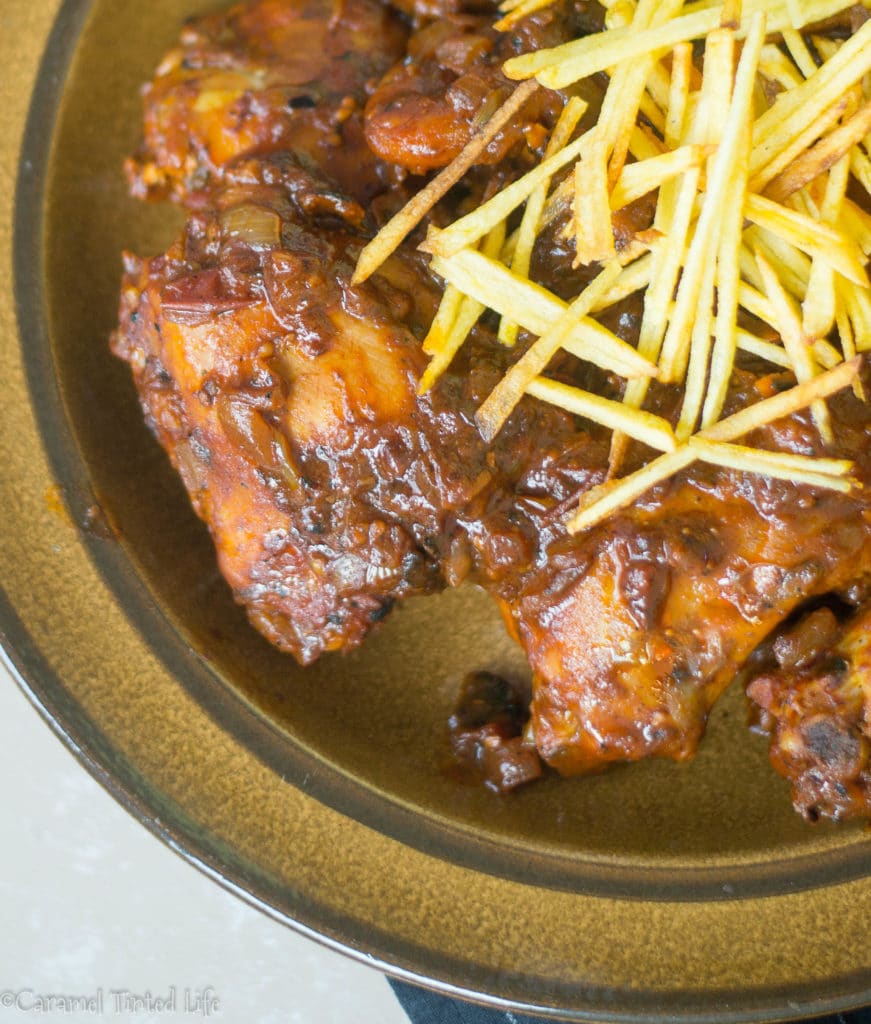 I lived for close to eight years in Bangalore, a city which has a constantly-evolving food scene. After I moved there to begin working at my first job, I was more than eager to begin exploring the famed restaurant scene in Bangalore. Those were the days before marriage and kid caught up with life and bank balances. Time that wasn't spent in battling traffic was assiduously devoted to eating out.

Restaurants in Bangalore have something for everybody and every budget. You could feast like a king on a very low budget, like my friends and I used to, on weekends, when we would pick up a thali (a very generously portioned Indian tasting platter) meal parcel from a hole-in-the-wall near our house. This Andhra-meal cost us less that Rs 40 (approximately 60 cents or 60 rappen) for a thali and would come with a portion of deep fried chicken packed with green chilies, assorted chutneys and spice powder, a huge serving of rasam (traditional spiced tamarind soup), and enough rice to feed a small village. 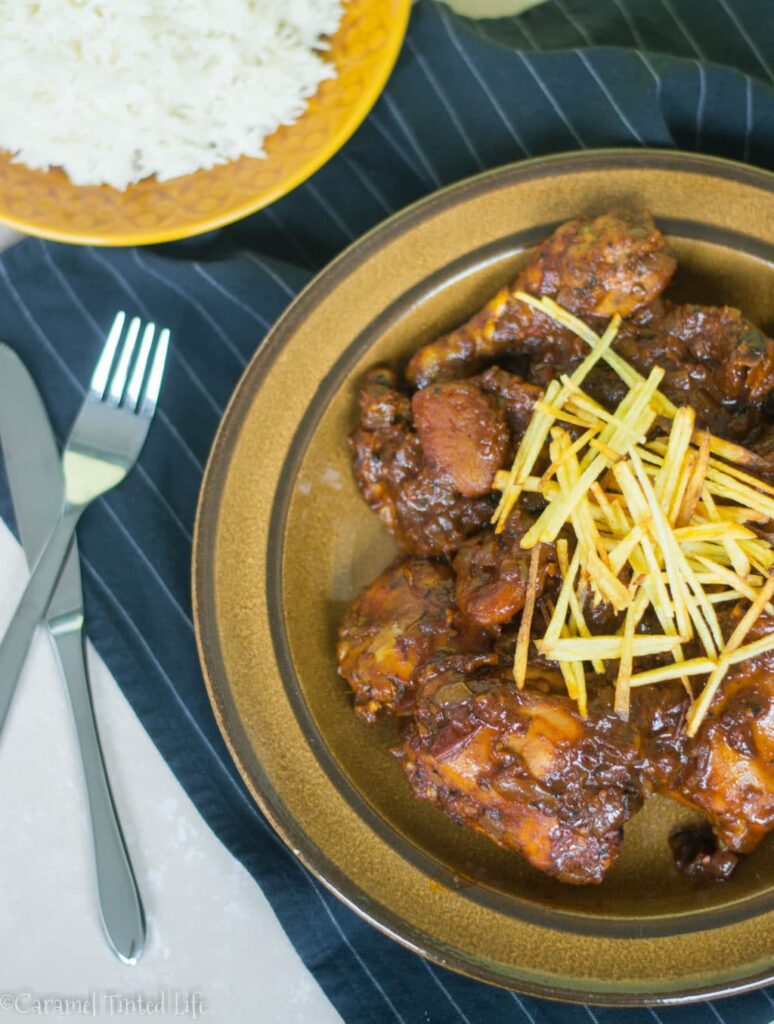 My husband (then boyfriend) and I would scout the city on weekends wolfing down chocolate brownies served with vanilla ice-cream and drenched in chocolate sauce at the legendary Corner House, eating out way through familiar (albeit spicy) Kerala food, and exploring new cuisines at such as kinbap (Korean seaweed rolls) and cinnamon tea at Soo Ra Sang.

Back then, the Zamatos and Yelps of the world hadn't really taken off. And for rookies like myself, the leading national newspaper came out with an annual round-up of the city's best restaurants. And so, it was thanks to my well-thumbed copy of Times Food Guide that I eventually discovered Daddy's Deli.

Daddy's Deli would consistently feature as the top-rated Parsi restaurant in Bangalore. Parsis, descendants of Persian Zoroastrians who emigrated to India, have a carved out a distinctive culture of their own. Parsis settled in the west coast of India, primarily in Gujarat and developed a cuisine that melded together traditional Gujarati culinary staples with meat and fish. Perhaps that was how Parsi dishes such as Dhansak (meat and lentil slow-cooked stew) and Jardaloo (meat cooked with dried apricots) came into being. 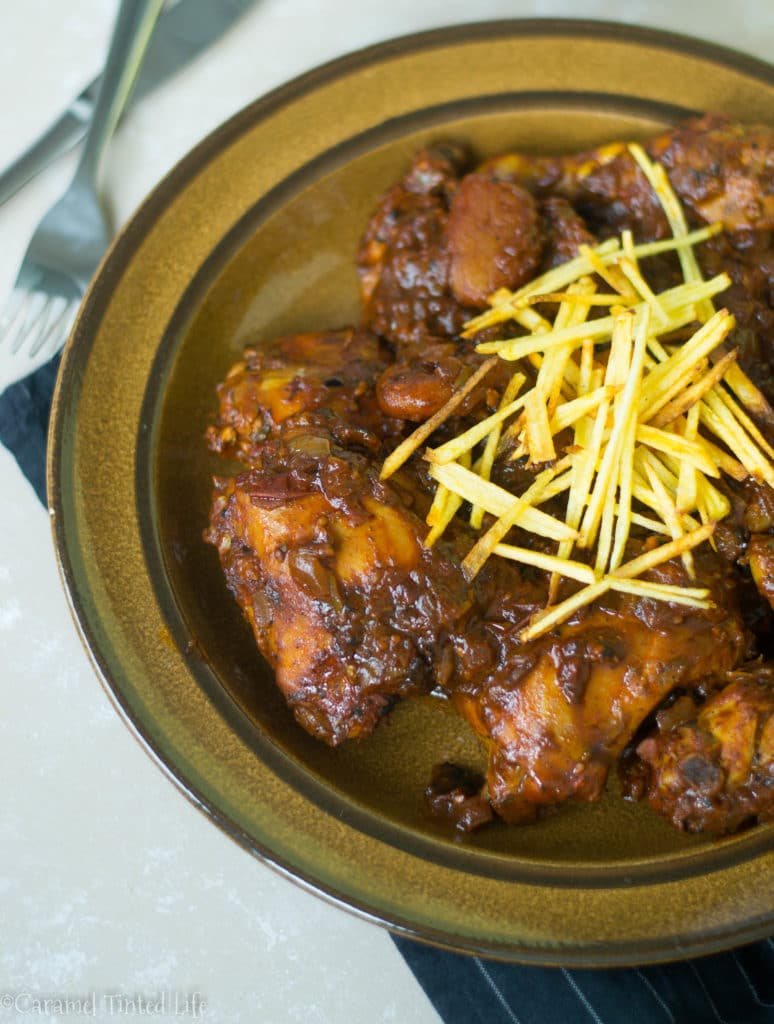 Aahhhh Parsi food was such a revelation to me! My friend from work and her Parsi husband highly recommended this restaurant. Eating at Daddy's Deli made me feel completely at home. Probably something to do with the friendly, easy-going, nature of the Parsi Indian community that was reflected in their food. But also because Parsi food has a some Goan influence as well, and as someone who was raised in Goa, the use of of ingredients like vinegar and green masala and the extensive use of meat and fish felt very familiar.

Bangalore's food scene has probably moved beyond what I remeber of it, some of my favourite restaurants having shut shop by now. So, to revive those memories of our culinary-adventures, I made this Jardaloo Salli Murgh. Daddy's Deli, may your tribe increase! 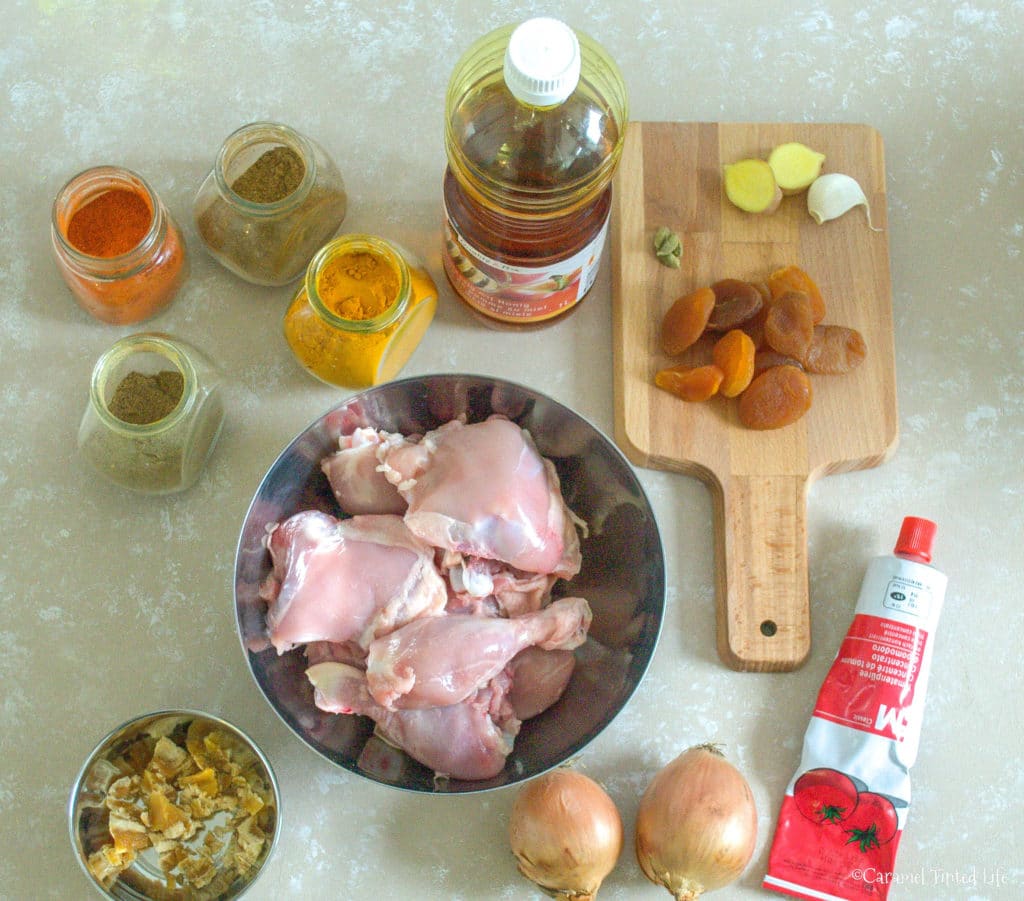 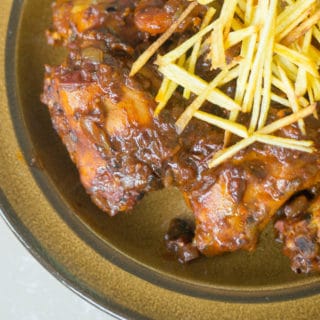 Jaggery is an unrefined traditional cane sugar that is popular in Indian cuisine. In Switzerland, it is available at local Indian and Sri-Lankan stores and can also be ordered online from www.swissrasoi.com
Have you tried this recipe?Tag me on Instagram! @carameltintedlife or use the hashtag #carameltintedlife

I am linking this recipe to the lovely folks at: