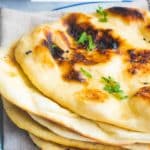 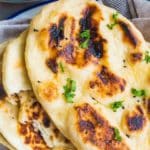 Instant Pot naan bread is a breeze to make at home! Soft, pillowy in texture with a hint of a crispy exterior. Use the Instant Pot to proof the dough, making this the quickest way to make naan from scratch.

(For detailed tips, step-by-step instructions and substitutions, please read through the this entire article)

Naan is an incredibly easy and simple bread to make at home. Flatbreads such as naan and pita bread don’t need to proof for too long, unlike regular breads. In under two  hours, naan can be made at home– including the time for proofing the dough.

Once you start making naan at home, you’ll never go back to buying store-bought naan, which is often a poor substitute for the real thing, right?

What is naan made of?

Naan is usually made with very simple ingredients – flour, salt, water, yogurt, and yeast, and is traditionally cooked in the tandoor (clay oven). After playing around with a few recipes for naan, I highly recommend adding some milk to enrich the dough, as it yields a soft textured naan. Naan recipes do not call for eggs to be added.

Use Bread Flour: Naan can be made with either bread flour or all-purpose flour, but I find that bread flour can make naan more elastic and pillowy in texture - which is what we are aiming for!

Use yogurt: Yogurt is key to obtaining the tender, soft texture that is characteristic of the naan. Do not replace yogurt with milk, as we need some of that tang that comes with yogurt.

Yeast: Yeast is what makes naan puff up, and gives it those characteristic air pockets or bubbles. Do not substitute yeast with leaving agents such as baking powder or baking soda.

How to make naan without a tandoor oven:

Traditionally, naan is baked in a tandoor (clay oven) which is hot enough to give it that characteristic crispy outer layer, pillowy soft inside and those beautiful char marks on the outside. To make it at home, though, I’ve realised that using a cast iron pan to cook the naan comes very close to the real deal.

Step by step process for making naan at home:

Start by warming the water and milk mixture to activate the yeast (if using activ dry yeast) - I use half a cup of milk mixed with water, and warm it just enough that it activates the yeast but not kills it. If you are using instant yeast, skip this step and add the yeast directly to the flour.

Add the warm milk to the bowl of a stand mixer and add sugar, letting the yeast activate. Once activated, add yogurt and oil, followed by the bread flour (or all-purpose-flour).

Add salt and knead the dough with the dough hook attachment. Alternatively, use your hands to combine all the ingredients into a slightly sticky dough. If the dough feels dry, add a little more water to the mixture. It is important that the dough is hydrated enough.

Heat a cast iron pan on the stovetop untill hot. Then place the rolled out dough on the cast iron pan and heat untill bubbles start to form. Sprinkle a few nigella seeds on the surface of the naan and flip it over to cook the other side. Once cooked, brush the top of the naan with some ghee or melted butter and serve.

You could also garnish it with some chopped coriander and Nigella seeds for that authentic restaurant experience.

Some commonly asked questions about naan:

What is the difference between naan and pita bread?

While naan dough uses yogurt and often milk, pita is made without added dairy. Pita breads are hence less dense and have bigger air pockets than naan does.

Can I make gluten-free naan?

Yes, you can! Although I have personal not tried making this recipe with gluten-free flour, here is a gluten-free naan recipe that has been tried and tested. This recipe does use eggs though.

If you are not using a stand mixer, combine all the ingredients for the dough gently on the countertop and knead for 2-3 minutes with a light hand to form the dough. If you are using the oven instead of a cast iron pan to bake the naan, bake it on a preheated pizza stone or baking sheet. The naan will cook in 3-4 minutes. 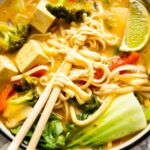 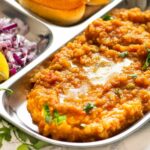 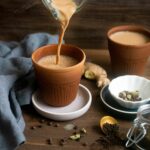 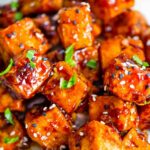 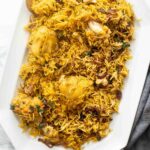 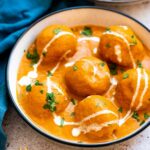 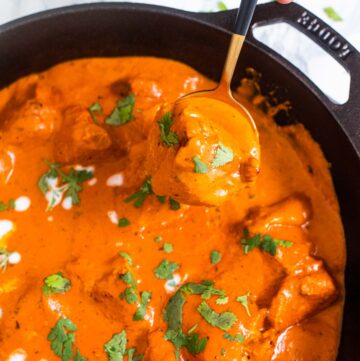